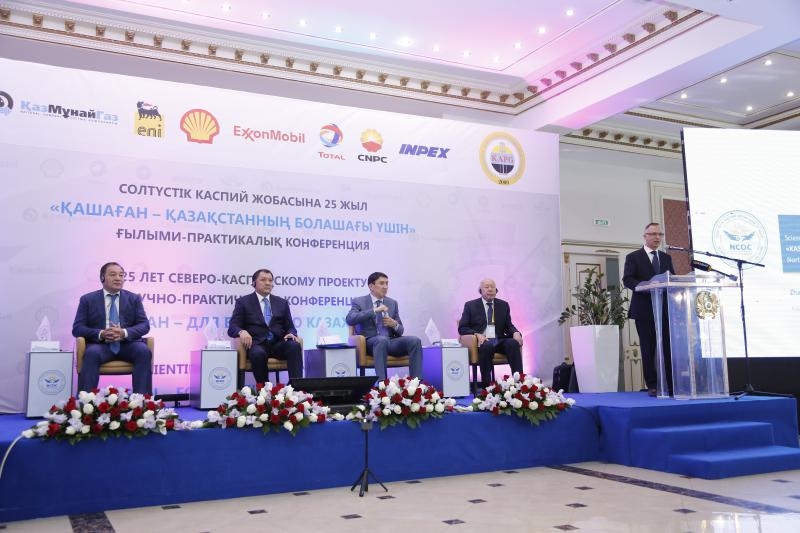 The delegation of Mangystau region headed by the Akim Eraly Tugzhanov took part in the scientific and practical conference "Kashagan - for the future of Kazakhstan" in the city of Atyrau.

During the conference, Bruno Jardin presented a report "The North Caspian Project - review and milestones, as well as the" Caspian Shelf - the beginning of a new era of oil exploration in Kazkhastan ", said Baltabek Kuandykov, President of the" Kazakhstan Society of Petroleum Geologists ".

The parties discussed projects and issues on environmental protection and biodiversity during the meeting.

"This is the project of our president, which gives a powerful impetus to the development of our country, independent Kazakhstan. I particularly want to thank the leadership of the consortium for active participation in the largest summit with the participation of the Caspian states’ Heads, which was recently held in Aktau, and the legal status of the Caspian Sea. This is a historic event, and the merit of your consortium is also a great achievement," - Eraly Tugzhanov said.

Kashagan is a large-scale project that has made a significant contribution to the development of Kazakhstan. Its implementation is carried out on the territory of two regions-Atyrau and Mangystau.

The Mangystau region cooperates with NCOC for 20 years. During this time, the Company invested more than $ 600 million in the development of the region, noted the Akim of the region Eraly Tugzhanov.

Over the past three years, the volume of investments amounted to 25 million US dollars. For all the time of cooperation the company has implemented more than 100 social and infrastructure projects. This is a boarding school for gifted children, a hostel for young professionals, schools and kindergartens, sports complexes and sports grounds, residential buildings and much more.

At the same time, Deputy Minister of Energy of the Republic of Kazakhstan Magzum Myrzagaliyev noted prospects for further cooperation on the Caspian shelf. "The opening of new fields will require investments, attraction of new technologies and creation of new jobs. Today, the consortium produced oil and condensate about 16 million tons, more than 5 billion cubic meters of gas, and exported more than 700,000 tons of sulfur. This is only the beginning of the development of Kazakhstan’s sea projects," - said Magzum Myrzagaliyev.

Akim of Atyrau region Nurlan Nogayev noted that the North Caspian project is not only Kashagan, which today has a huge impact on the economy of our country. Other fields are waiting for their development as well." I am sure that today's staff can accomplish the tasks assigned to them. A lot has to be done, but there is still a lot to do. "Zero cycle", careful attitude to the environment, safety issues are topical tasks that were at the beginning of the project and today they are vitally important issues. It is necessary to use all available experience and potential of the world oil industry to solve them," - stressed Nurlan Nogayev.

In the same section:
Location of the special economic
zone "Seaport Aktau"
The territory of SEZ «Seaport Aktau» consists of 6 sub-zones and coastal area. The total area of ​​the SEZ is - 2000 ha. Land lots provides to participants of SEZ till 2028 year.