SEZ «Aktau Seaport» - Area of Your success!
Press-Center » News
THE VOLUME OF SWISS INVESTMENTS IN THE ECONOMY OF KAZAKHSTAN AMOUNTED TO OVER $ 24 BILLION 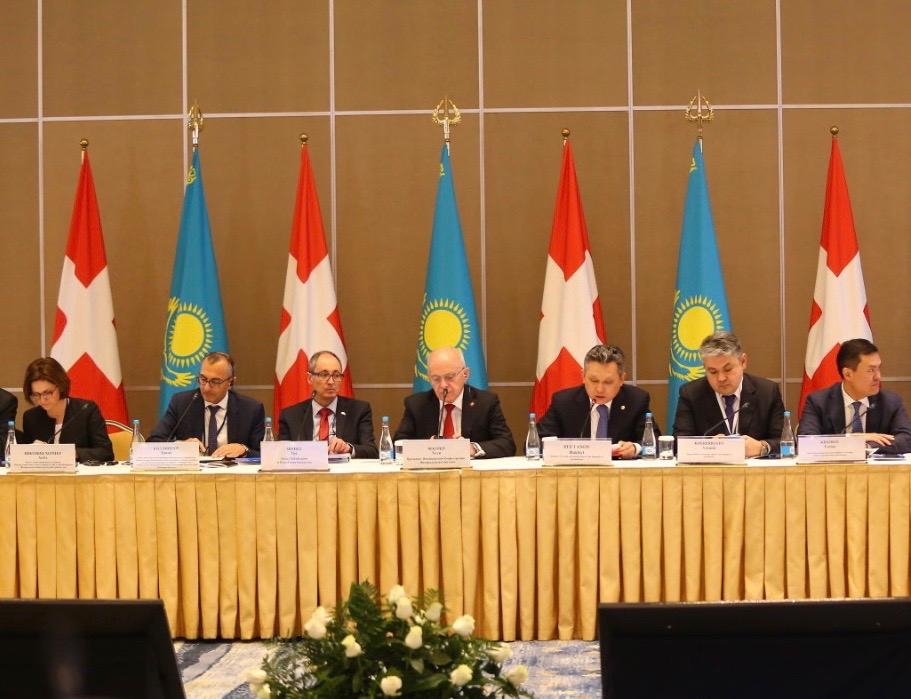 A Kazakh-Swiss Round Table held in Nur-Sultan, in which the President of Switzerland - Federal Councillor Ueli Maurer and the Minister of Trade and Integration of the Republic of Kazakhstan, Co-Chairman of the Kazakh-Swiss Intergovernmental Commission on Trade and Economic Cooperation Bakhyt Sultanov, as well as over 120 representatives of business interest of the two countries participated.

During the round table, the parties discussed the prospects for further expansion of trade, economic and investment cooperation between Kazakhstan and Switzerland.

“I am sure that today's roundtable meeting will give impetus to the development of business between the two countries. We have great opportunities to expand trade, economic and investment cooperation. And today we would like to discuss cooperation in joint investment projects of various fields” - said the Head of the Swiss Confederation.

In turn, the Minister of Trade and Integration of the Republic of Kazakhstan emphasized that the trade and economic partnership between Kazakhstan and Switzerland is at a fairly high level, urging businessmen of the two countries to explore additionally new investment cooperation opportunities in tourism, agriculture, machine building, pharmaceuticals and others.

“Kazakhstan and Switzerland have considerable potential for the further development of trade, economic and investment cooperation. Switzerland accounts for 8% of the total foreign direct investments in the economy of our country” - Bakhyt Sultanov noted.

During the round table, Swiss companies gained an offing to get acquainted with investment opportunities in the republic, exchange views with Kazakhstani partners and share business development prospects.

In addition, Nuri Ugurlu, Director of Swissgrow AG made a presentation. This company is engaged in production of more than 400 types of special fertilizers for agriculture which are used in various climatic conditions and for different types of soils.

The REY GROUP company, which is a leader in Residential and Hotel Real Estate, has also demonstrated its achievements. In Kazakhstan, REY GROUP participates in a project to develop the Burabay resort in Akmola region, as part of which, a hotel and a chalet in the Aqbura Resort is being constructed.

Matteo Apley, CEO of SUISAG AG, shared his experience and achievements in the pig industry, in the field of breeding and breeding animals.

In addition, on the sidelines of the round table in the framework of bilateral negotiations, the Kazakh and Swiss delegates discussed issues of cooperation in joint projects of machine building, tourism, agriculture, manufacturing, services, petrochemicals and energy.

As part of the dialogue platform, six documents were signed between the parties:

- Memorandum of cooperation “Development and implementation of a National hotel classification system in the Republic of Kazakhstan” between KAZAKH TOURISM and Swiss Choice Holding SA;

- Memorandum of cooperation “Traceability Labeling System” between Transtelecom and SICPA;

- Memorandum of Understanding between the AIFC and the BLACKFORT Company;

- Memorandum of Understanding between the AIFC and CLARUS CAPITAL;

- Memorandum of Understanding between the AIFC and HERCULIS.

It is worth noting that the official events held in the spirit of mutual understanding and confidence. The Parties noted that the agreements reached and the decisions taken will serve the benefit of citizens of the Republic of Kazakhstan and the Swiss Confederation.

For reference: Today, the Kazakh-Swiss Intergovernmental Commission on Trade and Economic Cooperation contributes to the expansion of bilateral economic relations. The co-chairman from the Kazakhstan side is the Minister of Trade and Integration of the Republic of Kazakhstan Bakhyt Sultanov. On the Swiss side, Erwin Bollinger (Ambassador), Head of the Office for Bilateral Economic Cooperation, Commissioner of the Federal Council for Trade Agreements.

In the same section:
Location of the special economic
zone "Seaport Aktau"
The territory of SEZ «Seaport Aktau» consists of 6 sub-zones and coastal area. The total area of ​​the SEZ is - 2000 ha. Land lots provides to participants of SEZ till 2028 year.